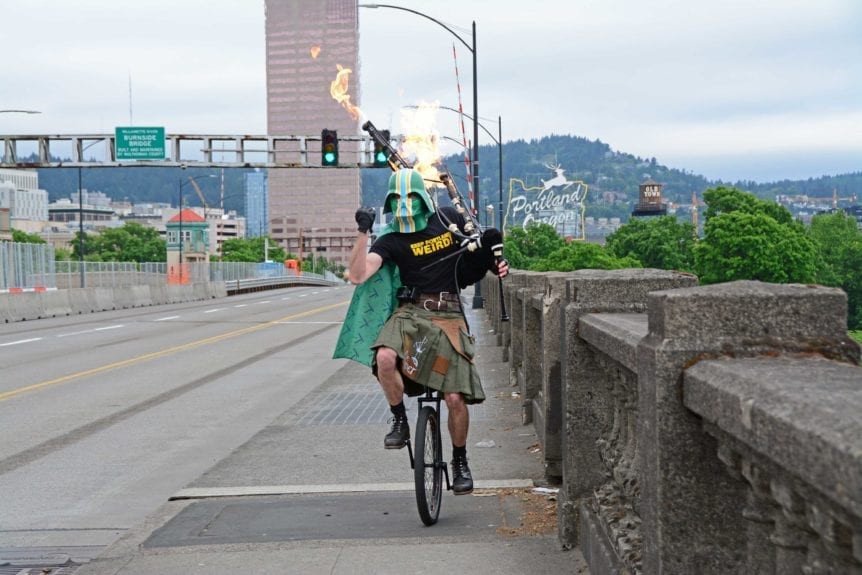 "A Portland icon’s quest to promote and support creativity."

A man in a Darth Vader costume riding a unicycle and playing flaming bagpipes can only mean one thing: you’re in Portland. “Keep Portland Weird” is the city’s unofficial motto for good reason. It’s a town that attracts people of all kinds. The mixture of historic and new buildings, along with its proximity to Oregon’s natural beauty, make it a hotbed of inspiration. This reputation for weirdness is what drew Brian Kidd—that unicycling, bagpipeplaying, costume-wearing man known as the “Unipiper”—to Portland.

“Portland’s weird spirit comes from its culture of freedom and acceptance,” says Kidd. “People here are more likely to express themselves in their own ways and not judge others for their expression. That creates a vibrant art scene.”

When Kidd moved here twelve years ago, he never expected to become an icon for Portland. He learned to unicycle and play bagpipes while going to college at the University of Virginia. While interning after graduation in North Carolina, Kidd started combining those two creative outlets.

A couple of Kidd’s college friends, who were from Portland, kept talking about how great it was. They told him he would fit right in. “I became sick of hearing about it! But when I decided I wanted a change of scenery, it was on my shortlist of places to check out.” Kidd moved sight unseen. He had no intention of staying long term, but the city and its people changed his mind.

Kidd started showing off his Unipiper act at Portland’s Saturday Market. He was quickly embraced by locals. Then a video he posted of his performance went viral. “I think the reason I was embraced was because, in one image, you could see what Portland is all about,” says Kidd. “I was just in the right place at the right time to become the symbol of a much larger movement.”

Since that video blew up, Kidd has appeared on America’s Got Talent, The Tonight Show with Jay Leno and Jimmy Kimmel Live! But those appearances were nothing compared to the support he’s found in the City of Roses. “Getting to perform live on TV is cool and all, but the best thing I’ve experienced as the Unipiper is being accepted by the community here.”

It’s hard to pin down exactly what makes Portland weird. “You can ask a 100 different people, you’ll get 100 different answers. Really, keeping Portland weird means preserving the things that the city built its reputation on in the first place,” says Kidd.

“THE CITY HAS A REPUTATION FOR LETTING EVERYONE BE THEMSELVES. IT HAS EVERYTHING YOU NEED TO FIGURE OUT WHO YOU ARE. CHANCES ARE, YOU ARE GOING TO FIND YOUR CROWD HERE.”

Finding those little things that make it unique can be hard for first-time visitors and new residents. Portland has a little something for everyone. “The true beauty of Portland reveals itself over time,” says Kidd.

But if Kidd had to pinpoint one thing someone visiting the area should see, it’s Multnomah Falls, about 45 minutes east of downtown. “When you travel to the Falls, you get to see that transition from the city into the natural landscape of the Columbia River Gorge. The scenery changes so drastically, and that helps you understand how nature affects the culture in Portland.”

Like most cities, Portland has been changing and growing. While new development brings with it fresh energy, it also makes it harder for new folks to realize what makes Portland great in the first place—all the weird little places fostered by its community of creatives.

Kidd thought for a long time that there should be an organization to help introduce all these newcomers, in addition to long-time residents, to the city’s weirdness and inspire them to share their creative side.

He thought someone else would start one. Then he realized he would have to make it happen himself. “I’ve built a reputation and have an audience, so I want to use that visibility to do good. I want to help foster that next Unipiper.” Kidd set out to start Weird Portland United, a non-profit dedicated to promoting and supporting creatives.

Weird Portland United hosts a monthly lecture and networking series and free community events around various PDX locales. It will also kick off the Weird Portland Hall of Fame with a gala. The non-profit will be providing Weird Community Betterment Grants for people who need a bit of money to make their creative ideas come to life. As an example, Kidd says the grant could go to purchasing billboard space for strictly weird use.

Kidd already has many “weirdos” on board, including Moshow, the internet-famous cat rapper. The mission of Weird Portland United: provide a platform where creative weirdos can share their stories and inspire others to do their part to keep Portland weird.

“I always say, be the weird you want to see in the world,” says Kidd. “Starting Weird Portland United is a culmination of my journey as the Unipiper.”

According to Kidd, Portland is that perfect environment to foster this creative expression. “The city has a reputation for letting everyone be themselves. It has everything you need to figure out who you are. Chances are, you are going to find your crowd here. I want to make sure it stays that place.”