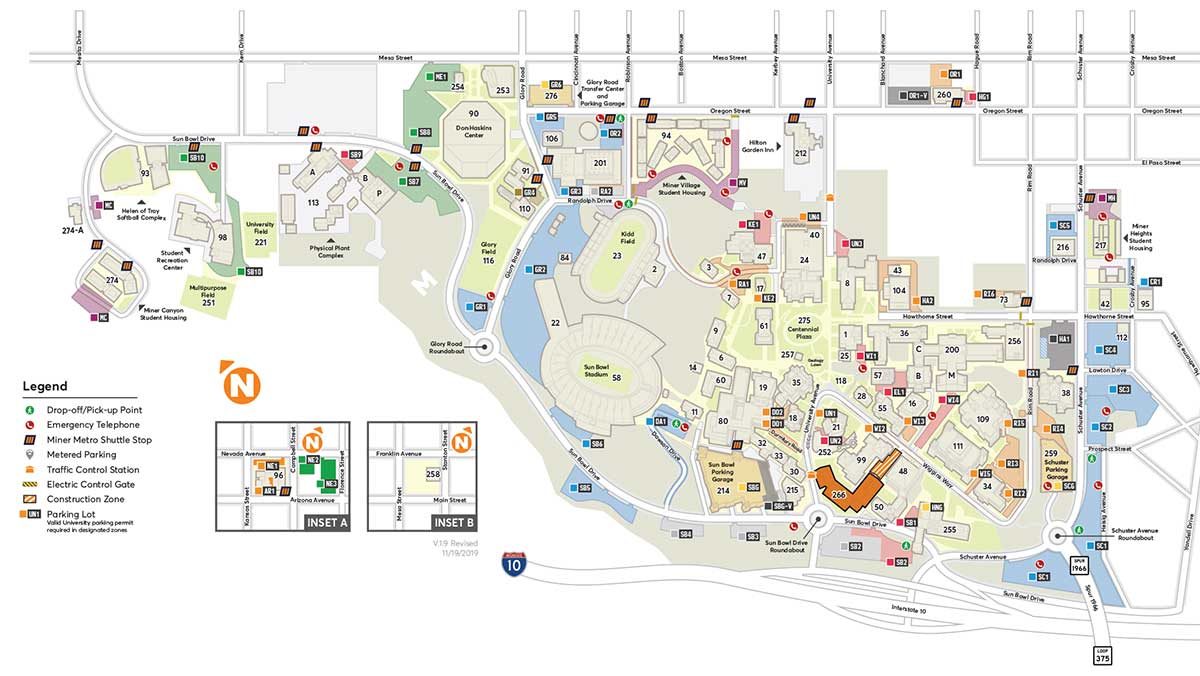 UTEP is a leader in American higher education, and the University’s unique mission and history are evident in the landscape of its beautiful campus. After a fire destroyed the University’s original site, the school moved to its current location in the foothills of the Franklin Mountains. The campus is known for its striking architecture, inspired by the Himalayan mountaintop fortresses of the Kingdom of Bhutan. From the original four buildings to its most recent multimillion-dollar research facilities, The University of Texas at El Paso is truly a campus like no other in the world. UTEP’s story goes beyond the buildings to chronicle the journey of the thousands of proud graduates who have made their way through UTEP’s academic programs during the past century.

Since 1917, Old Main has housed everything from classrooms and offices to a library and snack bar. Today it is an official Texas Historic Landmark and home of the sociology and anthropology department. Graham Hall, Vowell Hall and Quinn Hall round out the old campus. Quinn is named after a beloved geology professor who arrived in his office one day in 1952 to find a live alligator that had been kidnapped from the Downtown plaza. The hill behind Old Main still contains the entrance to a practice mine dug by the earliest mining students. The outdoor Mining Heritage Park – rededicated in 2015 – contains a three-stamp mining mill, a small ore crusher and a mining mucking machine – reminders of UTEP’s origins as a mining school.

Named after UTEP’s legendary men’s basketball coach, the Don Haskins Center is among the top basketball facilities in the Southwest and Conference USA. The arena was built in 1976 and seats nearly 12,000 fans. Haskins led the Miners to win the NCAA Championship in 1966 when he started, for the first time in championship game history, an all-African-American lineup during the championship game. Haskins entered the Basketball Hall of Fame in 1997 and the entire team followed 10 years later.

The nine-story Education Building houses all of the departments and support services for the College of Education. Since its early work with binational teacher exchanges in the 1950s, the college has been a national leader in bilingual education, community outreach and partnership programs, as well as degrees awarded to Hispanic students. Students in the college go on to careers as teachers, counselors, diagnosticians and school administrators – many of them working throughout the El Paso region.

The Union Building first opened in 1949 and three additions over the next 30 years produced two buildings connected by a breezeway that serves as a popular public gathering place. The Union houses a variety of offices and programs devoted to serving students, from the Student Government Association offices and the University Career Center to a food court and the Union Cinema. The UTEP Dinner Theatre is located in Union Building West. In 2015, the University unveiled the Pick ‘N’ Shovel buffet restaurant, an all-you-care-to-eat dining hall, on the Union’s second floor.

The College of Liberal Arts is the largest college on campus, with degrees and programs in disciplines ranging from musical theater to psychology to law school preparation. The college’s courses in the arts, humanities and social sciences provide the core of the University’s undergraduate education. The Liberal Arts Building opened in 1961 but is only one of many buildings devoted to the liberal arts. The Psychology Building contains laboratories for studying bilingual cognition, psychobiochemistry and judicial processes. The Cotton Memorial Building is home to El Paso’s first FM station and current public radio station, KTEP (88.5). Students, faculty and community artists share their talents in Magoffin Auditorium, the Stanlee and Gerald Rubin Center for the Visual Arts and the Fox Fine Arts Center.

UTEP’s strengths in engineering and science are united in an interconnected complex of high-tech buildings. The College of Engineering is consistently ranked as one of the nation’s top producers of Hispanic engineers, with degree programs in civil, electrical, environmental, industrial, manufacturing, mechanical, and materials and metallurgical engineering, as well as computer science and engineering leadership. Dozens of research centers and labs investigate space exploration technology, transportation, infrastructure, environmental resource management, human motion analysis and medical imaging informatics. The Engineering Building, Biology Building, Metallurgy Building, Classroom Building and Physical Sciences Building offer office, classroom and lab space. The complex sits over an arroyo, which is accessible through an internal courtyard.

Science and engineering unite in the state-of-the-art Chemistry and Computer Science Building. In this multidisciplinary facility, sophisticated research laboratories combine collaborative workspace with powerful research tools such as a cryo-electron microscope and X-ray generator and detector in labs for studying carbon nanomaterials, human-computer interaction, environmental chemistry and software engineering. The building is connected to the Engineering Building by a Bhutanese-style bridge. Together with the Bioscience Research Building, this building anchors the Engineering and Sciences Complex and draws national and international recognition and research grant money.

Every UTEP student is served by this one-stop location for assistance with admissions and recruitment, financial aid and scholarships, enrollment and registration, parking, study abroad and the Graduate School. The building is named after alumnus and donor Mike Loya, who graduated with a bachelor’s degree in mechanical engineering and went on to have a successful career in the global energy industry. In 2010, he was honored with the UTEP Distinguished Alumnus Award.

The College of Business Administration provides nationally accredited and internationally recognized training in business leadership and accounting. Its research centers promote regional economic development, entrepreneurial ventures, multicultural management and ethics, computer application learning and econometric forecasting. The building opened in 1983 and was joined by the Graduate Business Center in Downtown El Paso in 2010.

After occupying several locations around campus, the library found a home in this Bhutanese-style fortress in 1984. The six-floor facility features study and computer space and holds more than 1.2 million volumes, 200,000 government documents and 1 million microforms. More than 200 works of art are on permanent display throughout the library. The atrium houses a large tapestry sewn by Buddhist monks in Bhutan and a 5-foot by 7-foot book made from more than 40,000 photographs of the Himalayan nation. The 133-pound book was designated the library’s one-millionth volume and was the world’s largest published book at the time of its completion.

The College of Health Sciences and the School of Nursing both make their home in this five-story, state-of-the-art teaching and research facility. The undergraduate and graduate nursing programs are nationally ranked for awarding degrees to Hispanic students. The College of Health Sciences offers degree programs in kinesiology, occupational and physical therapy, and speech-language pathology, among others. The UTEP Center for Simulation is a 16,000-square-foot facility that features nine simulation labs, four testing rooms and six patient rooms – making it one of the largest immersive simulation labs in the United States. The back of the building features an impressive Bhutanese pedestrian bridge.

Completed in 1997, the Undergraduate Learning Center offers classrooms equipped with the most advanced learning and teaching technologies. Computer labs for students and faculty provide training, support and international video conferencing capabilities. The atrium houses a large Bhutanese tapestry and the east entrance features a Bhutanese chorten, a monument demarcating the threshold of enhanced human experience. The building’s large classrooms make it one of the most highly trafficked places on campus.

Unveiled in 2010, the 25-foot-tall “Mining Minds” sculpture connects UTEP’s mining heritage with its present and future. The steel pickaxe head contains a message in binary code – a series of ones and zeroes – that says, “Believe in yourself and in your dreams. Believe in UTEP and its aspirations. Share the dream!” On special occasions, the sculpture is illuminated in orange and blue.

The Centennial Museum was constructed in 1936 to celebrate the anniversary of Texas’ independence, making it the oldest museum in El Paso. Permanent exhibits in the museum focus on the natural and cultural history of the Chihuahuan Desert region, the largest desert in North America. A variety of temporary exhibits address themes related to border life and culture, the Americas and the University’s history and current activities.

The Chihuahuan Desert Gardens opened in 1999 and contain more than 800 species of plants native to the region and a Bhutanese prayer wheel. On the hillside south of the museum are several ceremonial flags, symbolic pleas for peace, compassion and wisdom.

The hand-carved and hand-painted Lhakhang is a gift from the people of Bhutan to the people of the United States and entrusted to the University’s care. It was first assembled on the National Mall in Washington, D.C., as part of the 2008 Smithsonian Folklife Festival. It now sits at the heart of UTEP’s Centennial Plaza, the largest and most enduring keepsake of the University’s Centennial Celebration.

The Geological Sciences Building has served many functions since it was first built in 1938. It originally housed the University’s administration offices and library. In 1990, the building was renamed the Geological Sciences Building, and today it houses the University’s geological sciences department. In addition to classrooms and faculty offices, the building houses the Geology Reading Room, an exquisitely crafted space that hosts many campus events.

Magoffin Auditorium is the University’s largest lecture hall and doubles as a concert hall for smaller events such as comedy and dance performances, musicals, plays and small concerts. It features more than 1,000 seats on one level with clear sight lines. Opened in 1950 and renovated in 1973, the auditorium is named after James Wiley Magoffin, an El Paso pioneer whose careers included trader, soldier and consulate worker.

Built in 1974, the Fox Fine Arts Center houses the music, art, and theatre and dance departments. The complex contains practice rooms, classrooms, art studios and performance venues, including the Recital Hall, the Studio Theatre and the William and Marie Wise Family Theatre. In 1978, the building was renamed the Josephine Clardy Fox Fine Arts Center to recognize a well-known supporter of local art and artisans in El Paso.

Stanlee and Gerald Rubin Center for the Visual Arts (11)

The Stanlee and Gerald Rubin Center for the Visual Arts is a contemporary art gallery on the UTEP campus that exhibits the work of renowned and burgeoning artists and serves as a learning facility for students. The center opened in 2004 in a renovated space inside one of UTEP’s oldest buildings – Seamon Hall – that dates back to the Old Campus in 1917. The center is named after El Pasoans who graduated from Texas Western College in 1965 and were named Distinguished Alumni in 2002. Gerald Rubin is the founder and former CEO of the company Helen of Troy, which has its corporate headquarters in El Paso.

Sun Bowl Stadium is a source of pride for both UTEP and the City of El Paso. With its strategic placement in the picturesque Franklin Mountains, the stadium itself has been lauded as one of the most beautiful college stadiums in the country by national audiences who either visit the Sun Bowl or see it on television during the annual Sun Bowl game. The stadium was built through a joint initiative between UTEP and El Paso County and was completed in 1963. On the first offensive play of the first home game, Larry Durham scored the stadium’s first touchdown, running 54 yards to set up a Miner win of 34-7. Additions to the Sun Bowl since its completion include a second floor press box, artificial turf, extra seating (now 51,500), state-of-the-art video scoreboards and a FieldTurf Classic HD CoolPlay playing surface. Stadium renovations that began in April 2018 have upgraded the west concourse and will add new premium seating options that include indoor/outdoor club seating, loge boxes, suites and a state-of-the-art club room called the Sky Lounge.