The Razorbacks represent not just the University of Arkansas but the pride of the entire state and farflung alumni who continue to cheer for the Hogs. The Razorbacks have established one of the most successful athletics programs in the country, winning 45 national championships in football, basketball, cross country, and indoor and outdoor track and field. U of A athletes have won 21 Olympic medals over the years.

The university’s eight men’s and 11 women’s varsity sports host more than 200 events annually. The combined teams finished 20th in competition for the 2016-17 Learfield Sports Directors Cup, a competition that tracks the nation’s most successful intercollegiate athletic performances. Arkansas has finished in the top 30 nine times in the last decade.

Razorback student-athletes have succeeded not only on the field but in the classroom, too. During the most recent year, 2018-19, the average GPA of student athletes was 3.24. An average of 100 student-athletes earn their degree each year. 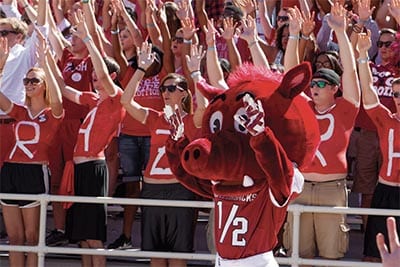