A few things to see on your visit

As you make your way around campus, you’re sure to notice something unique about many of the sidewalks. Historic Senior Walk showcases the names of more than 180,000 University of Arkansas graduates, grouped by year of graduation. Senior Walk is the university’s longest tradition in both length and years. It’s concrete proof of the university’s commitment to students.

You won’t be able to discover everything the university has to offer in a day, but here are a few attractions that you don’t want to miss.

1. Old Main (Pictured Top) — The architectural centerpiece of campus, Old Main opened for classes in 1875, making it the oldest building at the University of Arkansas. Visit the restored classrooms, take a closer look at the inner workings of the tower clock on the fourth floor and enjoy the shade of the trees on scenic Old Main Lawn. 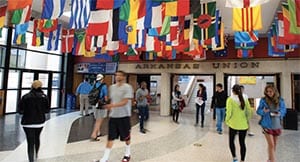 2. The Arkansas Union — Ranked as one of the nation’s top 25 “Most Amazing Campus Student Unions,” the Arkansas Union has been a favorite gathering spot for more than 40 years. The Union serves as a place for students to attend educational and cultural events, connect to campus resources, eat, study or just meet friends between classes, offering a food court, fitness center, technology center, post office, Razorback shop, art gallery, theatre, ATMs, and more. 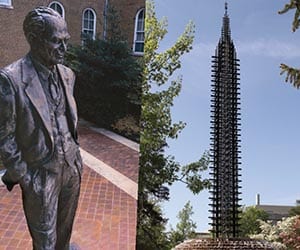 4. Fulbright Peace Fountain and Sculpture — These two impressive landmarks commemorate the legacy of the late U.S. Senator J. William Fulbright, a graduate and former president of the University of Arkansas. Fulbright famously helped create the Fulbright Scholarship Program, the largest international exchange program of its kind. Internationally renowned architect E. Fay Jones, a U of A graduate and former dean of the School of Architecture and Design, designed the Fulbright Peace Fountain. 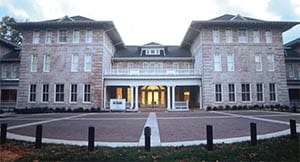 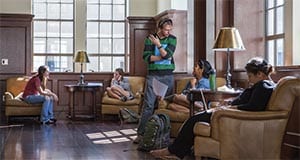 6. Honors College — Gearhart Hall serves as the home of our endowed Honors College, which unites the university’s top undergraduates and professors of all disciplines in a learning environment characterized by discovery, creativity and service. 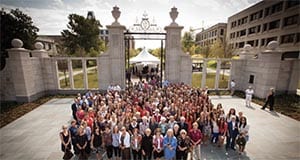 7. Pi Beta Phi Centennial Gate — The Pi Beta Phi sorority raised funds in 2010 to build a formal entrance to the university’s historic core to commemorate the sorority’s first 100 years on campus. It was dedicated in 2012. 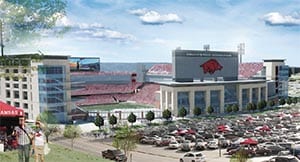 10. Walmart On Campus — The nation’s first Walmart on Campus is also one of the smallest Walmart stores in the country. It’s located in the Garland Center, which also includes the U of A Bookstore and a number of boutiques and dining options.


Locations highlighted on the campus map with a yellow corresponding numbered dot.